Single Review: Florence + The Machine – Shake It Out 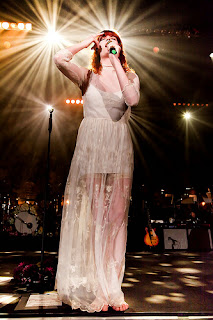 “It’s always darkest before the dawn” announces Florence Welch on lead single, ‘Shake It Out’ from the upcoming sophomore effort ‘Ceremonials’ and the darkness she speaks of is rife. Nobody can articulate and beautify their turmoil quite like Welch as she proved on her critically acclaimed debut ‘Lungs’ which fused optimism and a measure of reality to great success. Well, ‘Ceremonials’ looks set to continue in this vein if ‘Shake It Out’ is anything to go by.

One of the greatest things about ‘Shake It Out’ is that the track possesses an abundance of euphoria. Touching on the recent self-acceptance trend thankfully doesn’t find Florence in a sententious light, as she humbly declares “I am done with my graceless heart, tonight i am going to cut it out and restart”. The metaphors are rife but there is a surfeit of sincerity that is customary in Florence’s work.

Musically, the single is a blazing representation of the collective at their best – smashing the high notes with ease atop pounding drums, the backdrop sounds like an ecstatic ‘Cosmic Love’. Mellow strings bring the verses back down to earth from the dizzying heights of the sing along chorus and the glorious middle eight works it magic in lifting the track to a startling finale. To put it bluntly, ‘Shake It Out’ embodies the term anthemic.

The most striking element of the song however is that it harnesses a warmth and feeling that is impossible to communicate. Perhaps it’s the passion, perhaps it’s the flawless vocals or possibly even the songwriting but more likely, it’s the amalgamation of every aspect of a killer track which Florence so easily nails. Tracks like ‘Shake It Out’ don’t crop up often, but it delivers. Reading or hearing about the track only does it a disservice – it’s so much more than a few adjectives and only your ears can unlock the magic.

2 Replies to “Single Review: Florence + The Machine – Shake It Out”