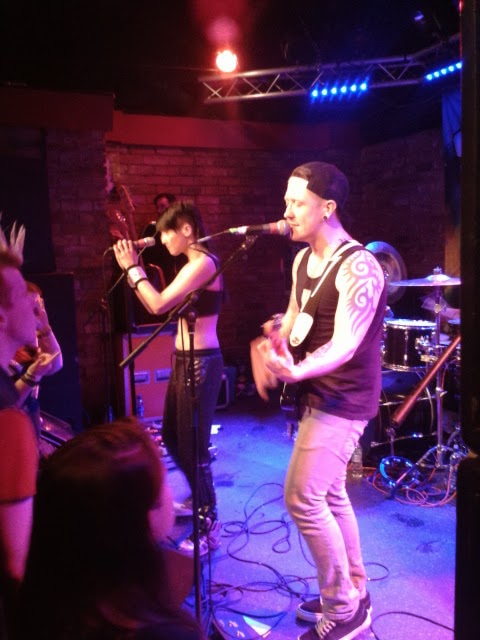 ‘Thats the first time anyone has called one of our songs a classic’, Laila K responds to a complimentary audience member. Sonic Boom Six have been kicking about for quite sometime now and despite sticking firmly in the underground they do have a fair few SB6 classics. Admitted, you won’t find them on a Now! compilation but the moment the opening lyric hits from ‘Sound Of A Revolution’, their own brand of ska-rap-punk-reggae-drum-n-bass-rock proves that it’s been crafted into a mighty back catalogue. One thing to love about attending a pre-album gig (the current tour is acting as a warm up for the impending fifth album due later this year) is that the setlist isn’t shaped firmly around the latest release – the band tonight give a nod to some old classics that have been M.I.A. for sometime (the aforementioned ‘classic’ comment being aimed towards the decade-old ‘Monkey See, Monkey Do’). It feels like a celebratory show – a run through of the greatest hits.

Paying special attention to the defining ‘A Ruff Guide To Genre-Terrorism’ will always go down well. ‘Apathy Begins At Home’ kicks off the first round of moshing whilst the ska flavour of ‘All In’ conjures a nostalgic vibe of the bands earlier material. No need to get all soppy about the good old days though – as Laila questions ‘are you happy we’re going back to our ska roots?’, the bands’ future feels rather intact in the hands of the trumpets.

The new material showcased tonight flits between the old-school ‘Joanna’ and ‘All The Same To Me’ to the instantly infectious ‘Drop The Bass’ and ‘Do What You Want To Do’ that garners a healthy sing-a-long despite it’s newbie status. The exciting prospect is that the latter two are logical continuations of the self titled record – bringing in some bass and electro undertones, whilst the former tracks bring a ska feel that never sounded fresher than on their debut. Just when you think these guys and gal can’t mix it up anymore, looks like we’re in for a real cacophony on album number five.

The set doesn’t rely on an all-hits finale – Sonic Boom Six have enough bangerz (no Miley, not you) to generously sprinkle throughout. ‘Virus’ finds itself three songs in and already feels like an encore performance with the way it sends an early surge through the crowd. ‘Piggy In The Middle’ will never not get the energy up to the maximum either – another session of moshing greets the frantic brass-vs-guitars hook. The encore itself though is a much more sedated affair – a rousing acoustic rendition of ‘Gary Got A Gun’ leads into the vibrant ‘Sunny Side Of The Street’ which proves another attribute that makes Sonic Boom Six so special and unique. It isn’t about ending on the biggest pit or making the most fuss – it’s actually all about the message that runs through their material – one that is present throughout the whole evening but feels no need to be patronisingly stated. It just exists and it’s part of the reason we need bands like Sonic Boom Six – bands who care about making a statement and a change and shows that aren’t really about the people onstage, but about inspiring something inside the eager eyes in the crowd that goes a little bit deeper than an awesome guitar riff.