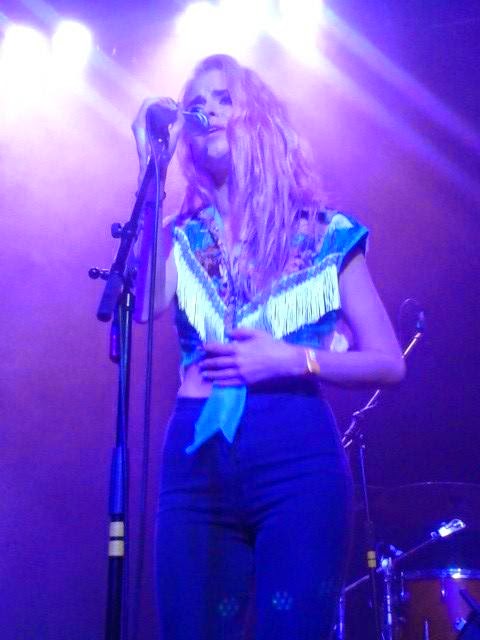 Kyla La Grange is slowly unveiling her electro wings as she emerges from the introverted debut campaign ‘Ashes’. It was a sublime effort, drawing from the dark and dramatic and delivering it in a rocky package. Bubbling beneath that indie exterior, however, was a proper popstar. ‘Ashes’ held the hooks and the melodies, but it’s underrated charms were eclipsed by ‘Cut Your Teeth’, a stunning simplistic and melancholic comeback that signalled things have changed in team La Grange.

Her set at Dot to Dot relied heavily on the newer material. ‘To Be Torn’ was the only track to be lifted from her debut, if we don’t count the acoustic ‘Vampire Smile’ sing-a-long she performed with the audience after the set. In itself, ‘To Be Torn’ has undergone quite the transformation from sparse ballad to a powerful trip-hop behemoth – it’s emotive chorus burns even brighter with the new atmospheric soundscape. New track ‘Cannibals’ also channels the Kyla of old, if only with a little more production – it ends the set with gusto, swelling into a fittingly epic finale.

Earlier in the 7-song set, we were treated to the defining singles – the aforementioned ‘Cut Your Teeth’ that got a well deserved cheer as it tinkled it’s opening synths and ‘The Knife’, the Ace Of Base-styled sophomore single boasting just as much of a response with it’s earworm chorus. Kyla’s lilting voice drifts through each track sounding sweet and pure but also, as the middle eight of ‘Cut Your Teeth’ proves, she is more than capable of delivering a sinister edge and her light airy tone gives it an even more haunting presence. Another cut from the new record, ‘I Don’t Hate You’ boasts something a little more unexpected – a chant-a-long chorus that begs you to join in teamed with the familiar bubbling beats underlying the bulk of the new material.

No more proof is needed that Kyla La Grange had found her sound. Atop the gorgeous set, her grinning smile and enthused bouncing around the stage hints that she, too, is enjoying her current foray. It can’t be just a happy accident though – she’s not an indie songstress who just chose to go mainstream. Kyla has something about her, her sweet but kooky persona and ability to pen an anthem with apparent ease – it’s all demonstrated beautifully on her impressive but flawed debut. In the run up to her second album though, Kyla is giving a striking impression that we may be dealing with one of the pop gems of the decade.