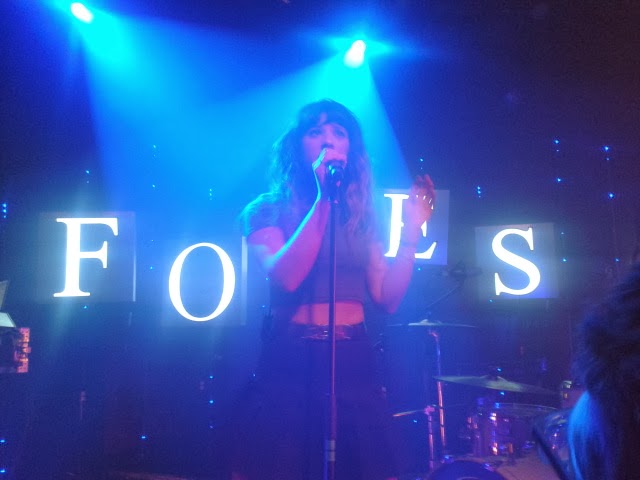 Foxes has some very good songs. She has had a steady run of singles for what seems like a decade and finally an album was confirmed last year. ‘Glorious’ will be released in May, but was initially scheduled to be released round about now – hence the tour. Not at all set back by this fact though, Louisa jumps onto the stage for a confident run through of what we can expect. She has no need to be fearful either – the albums setback is clearly not down to a lack of popularity as she is set to celebrate her first top ten the very same weekend.

The forthcoming album sounds established already. The hooks are infectious and the material is commercially geared – the most memorable of the bunch being the album’s title track ‘Glorious’ which recycled the best of ‘Youth’ with it’s reliance on Louisa’s pure passion. The song breaks down into a slower chorus but never loses any of it’s majesty – it’s clear that it will become a staple in Foxes’ live set in the future. ‘Shaking Heads’ also had a kick to it’s vibrant production which saw it stand strong against the legions of singles that already populated the set.

As Louisa performs the singles, it’s hard to believe you’re watching a new artist. These songs have already resonated with the army of dedicated fans (Allen herself sheds a few tears as the crowd recite the soaring refrain of ‘Youth’) and it’s easy to see why with material as well crafted as the hit single and career-defining ‘Let Go For Tonight’ that takes everything Foxes is capable of and underlines it with several broad strokes. It’s a song that is worthy of all the success it is currently receiving – a tune that has finally brought Foxes out of pop purgatory.

The only let-down for the material was the venue. Don’t get me wrong, I adore Stealth and it’s intimate vibe was unforgettable – being so close to the artist can’t be beaten, but the songs themselves feel much bigger and are already aiming towards arena sized capacity. Take the finale for example – whilst the acoustic ‘Beauty Queen’ fit perfectly in the cosy atmosphere, ‘Clarity’ burst the roof off the tiny venue and Louisa didn’t falter once in her delivery of the enormous Zedd collaboration – one of those songs that actually gets better when it’s performed live. But the silver lining is, if Foxes continues to grow at the rate she’s soaring at, we’ll look back fondly on the time we watched her deliver a truly exciting set up close and personal.