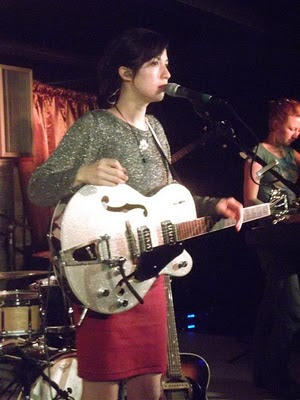 Not many artists appeal to such a wide demographic like Emmy The Great. Making your way into the Glee Club in Nottingham that night, you would have been greeted with the vastest age range this side of a family gathering. The star of this gathering not being a drunken auntie, but rather Emma Moss and Euan Hinshelwood’s brainchild ‘Emmy The Great’, touring on the back of their second album ‘Virtue’.

It Hugs Back began a seven-track set of jangly, euphoric pop rock. The single ‘Work Day’ makes an appearance close to the beginning of the set but the real star was the addictive ‘Half American’ as well as the acoustic beauty of the brooding ‘Times Square’ which grew to one of the most stunning climaxes of the evening.

Opening solo, Emma Moss entered the stage with a rendition of ‘Eastern Maria’ and settled any doubts with her incredible voice and beautiful deliverance. The track promised something special from the show before the immensely talented musicians joined her to treat the crowd with one of Emmy The Great’s signature tracks – ‘We Almost Had A Baby’.

The entire ‘Virtue’ album got an airing, apart from ‘Sylvia’ (which Emma later claimed that she ‘hated’ before thinking twice and admitting ‘well, maybe I don’t hate it…’) which joined ‘First Love’ and ‘MIA’ from her first record, along with a selection of covers, new songs and half of the ‘Edward’ EP.

Standouts from the set were the sultry tones of ‘Creation’, a magnificent cover of ‘Island in the Sun’ and a lively, uplifting performance of ‘First Love’. Current single ‘Paper Forest (In The Afterglow Of Rapture)’ shone particularly brightly, as did the sensational ‘A Woman, A Woman, A Century Of Sleep’. As their front woman ventured into the audience, Emmy The Great went on with the penultimate ‘North’ before closing the set with the piano-vocal beauty of ‘Trellick Tower’.

Emma’s wit and charm carried the set beautifully as she interacted with the crowd, chatting between songs and explaining how she struggled to post her latest video to Facebook as well as a little explanation about her rift with M.I.A. which, Emma admits, is quite one sided as ‘M.I.A. doesn’t know I’m not talking to her. I’ve never spoken to her, but now it’s on purpose’.

The aptly titled ‘Absentee’ was indeed absent from the set list so when Emma asked for any requests during the three-track encore, the crowd were quick to call out for it. Despite an initial panic from drummer Jim, Euan and Emma, the group went on to perform a flawless rendition which greeted a suitably pleased crowd before launching into an electric finale of EP track ‘Edward is Dedward’.

Listening to the records, ‘First Love’ and ‘Virtue’, side by side, the differences are startling. But on the live circuit, the songs blend together beautifully and make a lot of sense. The cracking set which displayed a wealth of talent in both performance and songwriting held the attention of an eager audience perfectly and performances like these can only further the fact that Emmy The Great are quickly becoming masters of both the studio and the stage.