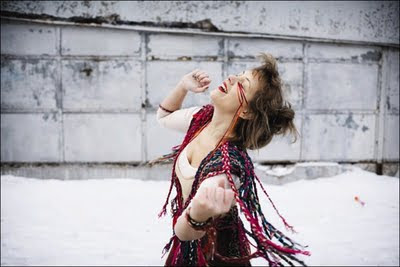 Niki and the Dove hail from Sweden and bring with them a Scandinavian outlook on pop; thriving with atmosphere and hooks. The driving drumbeat on the latest single ‘The Fox’, along with the swirling synths that surround the magnificent voice of vocalist Malin build up a wall of sound that is nothing short of incredible and conjures an atmosphere that is reminiscent of the accessible, yet daring style of Florence + The Machine with a touch of dance.

It’s no slight similarity either, as, alike Welch, Malin’s glorious voice captivates and is one of the strongest cards Niki and the Dove have to play. Her talent is indisputable after a few listens to ‘Mother Protect’, or better yet, the acapella version of ‘DJ, Ease My Mind’ and both professional and fan made recordings show that it is down to no studio trickery that she sounds as gifted as she is. Despite holding a very slight resemblance to Björk, her voice is unique in that it stands out from the crowd – it is one of the ingredients that make Niki and the Dove shine amongst their peers and brings a stunning edge to their sound.

Check out the phenomenal ‘Under The Bridges’ and ‘Mother Protect’ as examples of the way the band successfully bring electronics and  the modern into a soundscape brimming with drums and whistles and, most incredibly, merge them together in a coherent and beautiful fashion. Niki and the Dove aren’t just another new band to ignore, they are worthy of your attention and having already captivated Radio One, should set their sights on success.