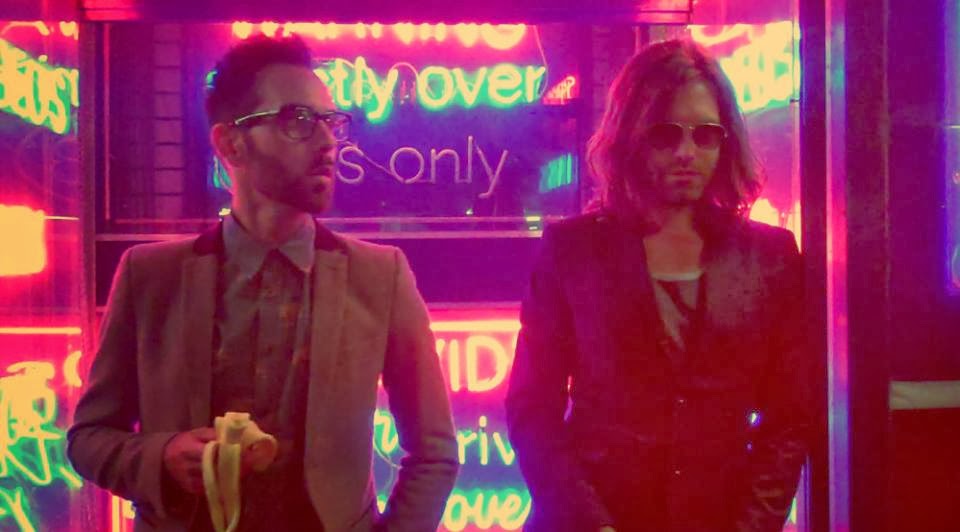 LectroLips make dancefloor tunes with a difference – the thinly veiled innuendos are stripped bare in their single ‘NSA’ and their attitude, exemplified by their social networks, are just as tongue-in-cheek. They don’t take the whole thing too seriously and, like most feel-good music, it’s not preaching or shoving anything down your throat. Pun slightly intended. The LectroLips project is, at it’s heart, good fun and the two masterminds behind it – Ant and Leo – engaged in a part interview and part race to mention Madonna first. Bad news if you were backing me, folks.
First things first, let’s shatter the enigma of the up and coming band and ask the basics: how did the two of you meet and when did Lectrolips form?
Leo: We met whilst I was doing some lounge singing at a hotel at Heathrow years back and we struck up a friendship. I’d been writing songs for a long time but I wasn’t great at lyrics – they were very basic and full of embarrassing love cliches. I swear, if Mariah used the word ‘sorrow’ in a song I’d be thinking ‘sorrow- now that’s a good word…where can I get that in’. So when I found out Ant liked to write, and I read some of his stuff, I jumped at the chance of working with him. I love how he’s very cryptic but also very accessible – there are lots of meanings to his words. Anyway, it was always the intention that I would be the artist performing the songs but by late 2008 we realised we were really a songwriting duo, so we put a name on it!
‘NSA’ is the single. It’s brilliant. Not quite sure I understand the lyrical content though…
Ant: Oh come come – ‘butter wouldn’t melt’ eyes don’t wash with us! It’s about hooking up. And you know it!
Ok, ok…. so the song is rather explicit, we can agree. Was it a conscious decision to present a more realistic side of gay culture?
Ant: No, we try not to do anything too consciously because that’s when things start to fall apart and you end up trying too hard. We just write what we feel like, what we know, and what we like to hear. And it’s funny- despite the subject matter and the one little naughty word, we don’t actually see it as explicit. It’s cheeky.
Musically, where are you now? Working on an EP, planning a new single…?
Leo: Musically we’re all over the place right now! But in a good way. A lot of our energy over the past year has gone on our live set and getting ourselves established as a physical band. But we’re also doing studio stuff – we’ve got about 10 tracks we want to be on our first official album release, which we’re hoping will be ready in a few months. Right now we’re taking the demos into the studio, opening the tracks up and honing them, so they’re as good as we can possibly make them, and we’re constantly working on ideas for new songs, live versions, and delving back to see if there’s anything worth salvaging from the past. We’ve got a new track called ‘Night Breed’ that we’re dying to get finished. 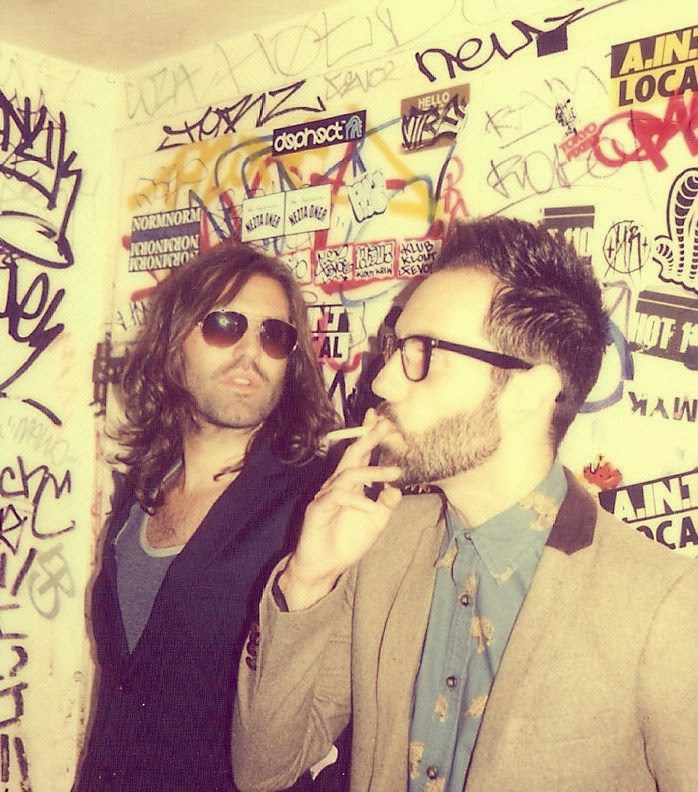 After performing your (first?) live show, you recently brought ‘NSA’ to LDN – what can we expect from a LectroLips live set?
Leo: We’ve done two live shows in London and it’s still early days, so it’s a fluid thing and neither of us know where it’ll really end up! But the general idea is to go through the set seamlessly, a bit like a DJ set, with one song rolling straight into the other. I’ve never really liked talking in between songs, so we didn’t want that – we just want to let the music to do the talking and have as much fun on stage as humanly possible. It’s quite hard to do our sort of music live because it has to be so precise to sound good, but we’re working with some really talented musicians on and off stage to help bring our ideas to life.
Are there any plans to tour elsewhere in 2014? I think LectroLips in Nottingham might be the most fabulous event of the year. No bias, of course.
Ant: At the moment we’re playing gigs that are local to us, in and around London. But if you’re asking, we’re coming! Do you think Nottingham could get down for some NSA?
Ofcourse we are! Going forward, how do you see yourselves progressing onstage? Do you have ambitions for more of a spectacle, or do you prefer the rawer side of simply performing the songs? (Basically, are we going to get some scantily clad dancers when you perform ‘NSA’ on your debut arena tour?)
Leo: It’s constantly growing, and the only way to really tell if something works or not on stage is to just get on and do it. And if it doesn’t sit right, try something different. With the time and the budget, there’s so much we’d love to do visually, but the main focus for both of us is first and foremost whether it sounds right. Ideally we’d have as many musicians on stage as we needed to produce the best possible sound. Ant does have a fantasy of us having our own dance troupe called LectroHips – so one day, who knows? When you say ‘scantily clad’ you mean ‘naked’ though, right?

Ant: Oh yes – LGBT role models can be a huge support and inspiration to gay youth, particularly for those coming out. When anyone uses their voice in support of freedom and equality it’s a good thing in our book. We’ve never set out to make any statements with our music but we’re never going to shy away from being honest.
And whilst we’re being serious, let’s get philosophical. Personally and professionally, what is the point that will make you feel that LectroLips have succeeded?
Ant: Of course we have ambitions, but to us we succeeded when we wrote and recorded our first song. Everything that happens now is a bonus.
Who were your role models when you grew up? What music did you listen to and who inspired you to make music yourselves?
Ant: We both love all types of music and we get our inspiration from all kinds of places – music, films and photography. But it’s no secret that Madonna has always been the biggest role model for me. She’s been written off since her first album, but 30 years later she’s still here, still doing what she does. You have to admire that, regardless of whether you like her or not.
Finally and, let’s be honest, most importantly – if you had the chance to write for either Britney, Madonna or Gaga , which pop ledge would you choose?
LectroLips: Madonna.
Right, well that answers that then. ‘NSA’ is out on iTunes at this very moment. You can read my review of the track right here. If you happen to be Azealia Banks and would like to start a Twitter feud with LectroLips, their twitter is here.
Photos: Facebook
Interview: Simon McMurdo