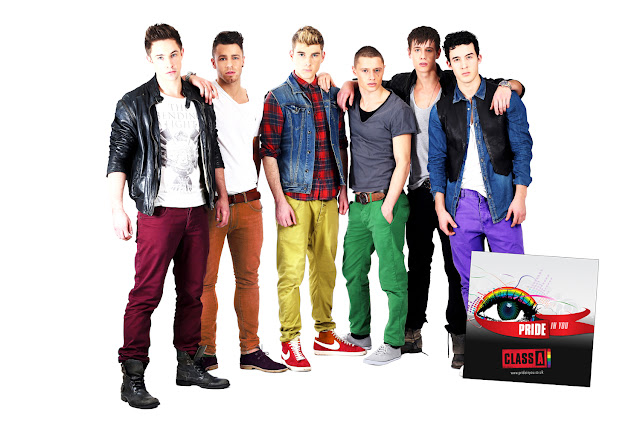 Class A are quite something. Check them out on Twitter and Youtube and see the mass of support they’ve built up from nothing in less than a year- these boys are the genuine article, boasting outspoken antics, brilliant voices and most rare of all in boybands – an enviable talent for songwriting. Opposing the norm, the boys are a six piece made up of Craig, Jake, Robin, Sean, Seb and James and are bringing out a vintage style of pop that feels like Duran Duran meets Pet Shop Boys, rounded off with a sophisticated touch; all you can hope to know about their previous single ‘MOC’ is available in my review of the single but as I chatted to the guys, the main point of excitement was their debut chart single ‘Pride’…

Hello Class A, how are you?
Class A: Good. Yes. Excited. Our debut UK single is out on the 25th March so we’re buzzing. ‘Pride’.

Can you tell us a bit about how the band came to be?
Class A: 4 of us met through an audition looking for guys who could sing dance and write their own music. Like with any concoction you have to keep trying until you get it right. Craig and Sean joined the party and the six of us have been Class A since September 2012.
Robin – I’m one of those losers that believes it was all fate and no-ones convincing me otherwise.
Jake: NASA scoured the Universe for talent and plucked each of us from our intergalactic corners.

What is a typical day in the life of a Class A member like?
Robin: A rollercoaster.
Sean: No two days are ever the same. If one were like a screwdriver, the next would be like a spanner and the next a hammer. All tools, but different each time.
Seb: Gym, rehearse, gym, perform, party.
Craig: Twitter, rehearse, twitter, perform, twitter, bed.
James: Right now – Pride. Single came out on the 25th so we’re singing it pretty much every day. In our sleep. Sleepsinging.

If you had to nail down the best and worst bits of being in a boyband, what would they be?
James, Jake , Seb & Robin: The best? Writing and performing!
James: On stage with a crowd is my happy place.
Sean: The Class A family vibe.
Craig: Yeah the dancing, the performing, the family vibe.
James: Craig’s our chief choreographer, except when he gets it wrong.
Craig: Never…
Robin: The worst? Days off.

Something that is undeniable is the strength of your vocals – are you all vocally trained?
Class A: No. Some had more singing experience than others, James, Sean and Robin had a lot of previous experience performing live but our musical backgrounds are all very different and we think that shows in our songs, both in how they’re written and how they’re performed. Of course, we all get help to improve and maintain our voices – like with anything you want to be the best you can be.

Which musicians inspired you when you began making music and who are you listening to today?
Class A: Again we all have different musical backgrounds and different tastes – pop, dance, classical, rock. We’ve tried to fuse the 6 musical personalities to create our own genre – Class A. Lady Gaga and Queen have been two major influences in our music but we’re ever evolving, we’ve been listening to a lot of Michael Jackson and Jessie J at the moment so that will doubtless show in our material.

So far, you guys have been very DIY and worked from the ground up which is rare for a boyband. Have you had any label interest?
Class A: Yeah we’ve done it all ourselves. Then there comes a point where you need help and we’ve been lucky enough to get it. We have a great team working with us.

A quick look at your twitter pages sees you interacting with fans constantly – how important has social media contributed to your success so far?
Robin: Very important, if you don’t believe me, tweet me about it.
Jake & Sean: Twitter’s taken over our lives. Follow us!!! @ClassAOfficial
Craig, Seb & James: We love our fans, they motivate us to work harder and be better. They support us and it’s part of our role to support them as best we can and that involves interacting with as many of them as possible!

On a grand scale, what is the plan for the future? What are your ambitions for Class A in general – number one single? To win a Brit?
Robin: To keep making music til’ death do us part.
Jake: To be recognised for our music.
Seb: To get so big they’re playing our music on Mars.
Craig: To keep growing as artists.
James: Ever evolving, always surprising, never boring. Never to be evicted from our home: the stage!
Sean: Class A to the end!

As a band that, thus far, have received a lot of support from the gay community, did they play any part in inspiring the new single ‘Pride’?
James: ‘Pride’ is about ‘no hate’ and everything that the statement encompasses. An incident which only occurred earlier this year brought back memories of being bullied and with it a lot of anger and emotions. ‘Pride’ was the result of those feelings, something that all the Class A boys could relate to through things they’d all experienced at points in their life. It’s a song based on a personal account, of overcoming prejudice, being proud of who you are and finding help, support, love and unity in the face of such needless prejudice.

Is there an album in the works? Can you tell us about a few of the tracks we have yet to hear?
Class A: There is. We were only chatting about album names the other day in Birmingham before we performed at the ICC. We’re afraid we can’t give anything away but if you like what you’ve already heard, we can promise that it only gets better!

Which Class A song are you most proud of? Any personal favourites?
Class A: ‘Pride’!
Robin: Not just because it’s a fitting answer, it promotes unity and opposes discrimination of all types…
Robin Seb & James: It’s mind blowing to perform ‘Pride’ on a stage and see people, some who have never heard it before, appreciating, understanding and relating to something that is important to us.

Tracks like ‘Superhero’ and the Class A theme streaming on Soundcloud are full of drama and sound like they were born to be performed live. What is a Class A live set like? Plenty of energy?
James: The buzz performing our material with the other 5 guys in front of a sellout crowd is like nothing on earth!
Jake: We recently had a gig at the Birmingham ICC and nearly got my head blown of by a pyrotechnic.
Robin: The live show is an evolving beast. We’ve kept it pretty natural so far as we’re trying to entice people with our music and not too many gimmicks, but that said I can’t wait to put some pyrotechnics along with ‘Superhero’ and maybe dangle on some wires …
Craig: We want a Gaga-esque live show to tour with!
Sean: …like the Take That live tour!

How do you see the live show progressing? Plenty of female dancers, perhaps?
Class A: Well that would no doubt help entice a certain demographic to our shows, but like James said ‘ever evolving, always surprising, never boring’!

I know you guys aren’t afraid to say what you think, so you might enjoy this next bit. What do you think of the following artists that everyone is talking about at the moment..

Beyonce?
Class A: Flying the flag. Grown through the industry. Everything she touches turns to gold. Hats off.

One Direction?
Class A: Great product, huge machine behind them, incredible success, the jewel in Mr. Cowell’s crown no doubt.

Justin Timberlake?
Class A: Probably the male equivalent of Beyoncé, started with N-Sync, showed he’s versatile as an artist and has grown through the industry to become one of the words biggest entertainment brands.

Thanks a bunch for your time and thoughts, Class A – it’s been briliant. Any last messages to your A-lister fans?
Class A: We speak to them every day but here it is in official interview font… ‘ClassAngels & AListers, we love you, you know that. The Class A boys X’.

Class A’s debut chart single ‘Pride’ is available on iTunes – the band wish to emphasize their support for the Stonewall charity and the statement: Class Anti Hate, Class Anti Discrimination and Class Anti Bullying that supports the message of the single. They are available to follow on Twitter, Facebook and their official site.