Finest Selection: The Top 54 Songs By The Saturdays 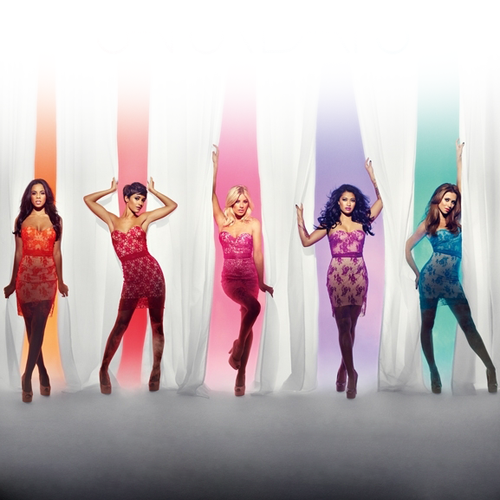 The Saturdays are releasing their ‘Finest Selection’ tomorrow. Sadly for Frankie, Mollie, UnaVanessaRochelle, it’s proven fact that they don’t know their material as well as their fans so, as a long-time member of Team Sats, I have taken it upon myself to put together my own list of the ultimate Sats songs. I haven’t included bonus tracks (Sorry ‘Move On U’) and I haven’t bothered with B-sides either (Sorry ‘Golden Rules’) but every single album track has come under my scrutiny and been provided with a ranking against it’s peers. Oh and, naturally, it’s all just opinion – though anyone thinking ‘Just Can’t Get Enough’ shouldn’t be last is wrong. Sorry about that.

54. Just Can’t Get Enough
53. Forever Is Over
The title, the chorus and the lyrics are stellar – the instrumental however is lacking, a rock vibe that even The Beautiful South would shun for being too inoffensive. One of those tunes that, having packed more of a punch, would be sitting at the top of this list.
52. No One
51. If This Is Love
Yeah, it’s alright but as a debut single for a band hoping to be the next pop behemoth? That chorus just doesn’t cut it. There isn’t enough to cling onto, basically. ‘Up’ was a Godsend and this should have remained in the ‘decent album track’ queue.
50. Lease My Love 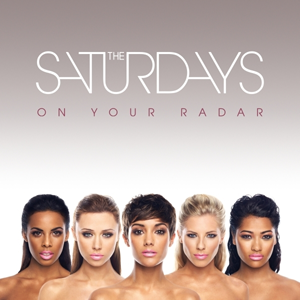 48. Promise Me
The latter two tracks, whilst pretty alright when you listen, are so devoid of personality and USP’s that I could barely remember which was which. Highlighting the main issue with their parental record, ‘Promise Me’ and ‘For Myself’ tried so hard to fit into the musical climate of the time that they ended up sounding dated and out of time by their release. That being said, ‘You Promise Me-me The-the World’ is a lorra fun to sing.
47. Somebody Else’s Life
46.  Set Me Off 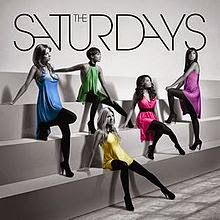 45. Last Call
44. Chasing Lights
43. Vulnerable
42. Wish I Didn’t Know
41. Died In Your Eyes
40. 30 Days
A single that, after a few plays, started to sound a tad weak already. The ‘ahh-a-ahh”s in the chorus remain it’s standout moment though and it’s definitely not deserving of the lack of impact it had. Though, it partially sits low on this list for the panic caused after the ‘On Your Radar’ campaign didn’t perform as expected and ’30 Days’ didn’t put up much of a fight either, leaving Team Sats in the frightful is-this-the-end position.
39. Don’t Let Me Dance Alone
38. You Don’t Have The Right
37. Anywhere With You 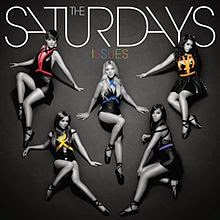 The only issue (HAH!) that I have with ‘Issues’ is that it is a strong ballad that has been overplayed to the point in which you start to spot it’s flaws before it’s charms. Still, probably the moment The Saturdays became proper popstars. The umbrellas in the video were ace.
35. My Heart Takes Over
34. What About Us
‘Ego’, myself and the rest of their career are offended that this was their first number one. Though, let’s be honest, it owes it’s entire success to Rochelle’s faux-Jamaican accent in the first-ah-line-ah.
33.. The Way You Watch Me
‘This is going to be the big one’, we were all told prior to ‘On Your Radar”s release. It wasn’t, though. Still, a decent effort that wins bonus points for standing out against the dance-pop heavy record.
32. Not Giving Up 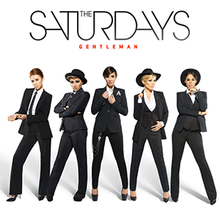 31. The Problem With Love
30. Gentleman
‘Gentleman’ is written from the book of pure pop genius. Cultural references, fantastic video and erring on the side of camp and crazy at all times. Given a little more of a big chorus, it might have shot a little higher on both this chart and the UK Top 40.
29. Lies
28. Not Good Enough
Could have eclipsed the next few tracks if it didn’t possess the incredibly wrong lyric – ‘my eyes doesn’t wanna look at you’. Or perhaps that’s the reason I love it. I’m not sure.
27. Do What You Want With Me 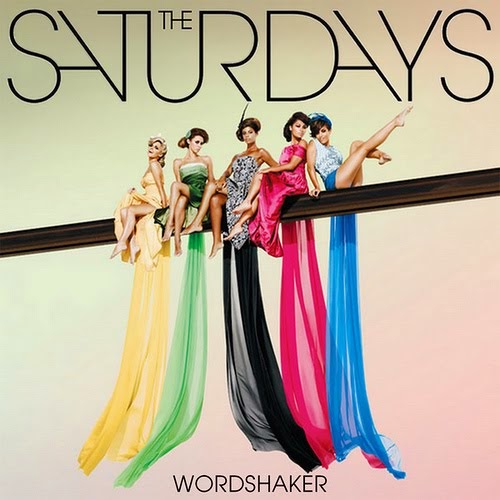 26. Deeper
25. White Lies
Just sit back and remember that this was the only ‘On Your Radar’ album track omitted from their first arena tour – despite being, as this list evidences, the 5th best song from the album. They even ditched a pregnant Una to perform ‘Do What You Want With Me’. Sad times.
24. Here Standing
23. Keep Her
22. Fall
The Sats rarely go into full-blown ballad territory (call it the ‘Girls Aloud effect’), but ‘Fall’ is made even sweeter for that reason. A hidden beauty sitting on their ‘Chasing Lights’ record, it showed a little more variety to the girls, as is standard on a debut. Vanessa owns the vocals, as per usual, and gives a killer performance brimming with passion. And let’s not forget that time Mollie cried after performing it. Tres emosh.
21. Leave A Light On
20. Denial
19. Open Up
Had this been a One Direction single, it would have been an international success. Sadly The Sats don’t have that kind of power but ‘Open Up’ remains a highlight from their half-forgotten ‘Wordshaker’ effort. Spunky, vibrant and full of life – if the album’s early singles had been bigger, tracks like this may even have been given the single treatment. Think about that and you too may shove ‘Forever Is Over’ as low as I have… 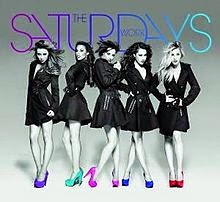 18. Puppet
17. Work
16. Lose Control
Perhaps if Vanessa had hung around on Popstar to Operastar a little longer, she might have been able to hold that incredible note live. Still, we have this recorded version and you can’t really complain. It boasts about sixteen different killer bits – nostably the ‘neverbeforeimetyababy neverbeforetonight’ refrain and the sensational ‘ooo-aooo-oooh!’s. That’s how it’s done, girlbands. That’s how it’s done.
15. 2AM
14. Missing You
13. Faster
As with ‘Open Up’, ‘Faster’ was a shoe-in for next single if the ‘On Your Radar’ campaign hadn’t been halted before it got going. Still sounding immense today, the track will never be as current as when the record was released – it had all the makings of a hit, sat within the pop climate beautifully and boasted that stripped-back middle eight; a heart-stopping affair. 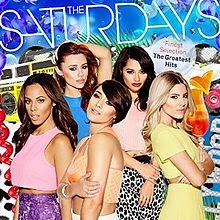 This is subject to change when old-age hits.
11. Get Ready, Get Set
Deserving of it’s fan-favourite status, the winner of The Saturdays recent poll is an all-guns-blazing approach to a banger and sounds like a gay anthem that never was. Just imagine if Kylie released this? Years later, it sounds fresh and fierce – them guns are still a’blazin.
10. All Fired Up
9. Wordshaker
8. Up
Regarded as the saviour of The Saturdays after their lukewarm debut, the bubbling beats and infectious lyrics of ‘Up’ secured them a massive hit for their follow-up. The jaunty, sharp vocal lines of the chorus make for one of the funnest hooks of the decade and the tune displays all the charm of pure pop – it was unashamed of it’s positivity and infinitely proud of it’s bubblegum undertones.
7. Why Me, Why Now
Probably one of the best ‘unspoken’ Saturdays songs – it closed their debut as a charming, warm highlight. The shimmering beats give way to a soaring chorus and an old-school vibe chucked in to match the thick vocals layered gorgeously in the hook – the way they all drop out at different moments in the ‘Distance-e-ee’ is subtle pop genius in that very moment. 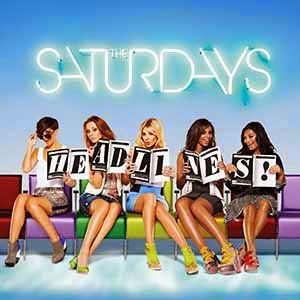 6. Ego
Generally quite amazing.
5. Higher
Generally amazing.
4.  Notorious
Generally, absolutely amazing.
3. One Shot
The defiant and triumphant hook has never been matched in their career since – and this early highlight came from their second record. It sounds epic and soaring with a Starsmith fiddle landing it a place on the ‘Headlines!’ mini-album. The latter remix only underlined the massive refrain even more and, as it opened their ‘Headlines!’ tour, it begged the question why it never got the chance to be a single and lesser tunes did. 🙁
2. Disco Love
Their mixed-bag release ‘Living For The Weekend’ might have been a little disappointing but all can be forgiven when you remember that this incredible smash is on it. I can sit here and go on about the middle eight being stunning (it is) and the ‘baby baby baby’ being the most addictive sing-a-long moment of their career ( it is) but what ‘Disco Love’ has is the magic something that brings everything together with ease, sounds effortless and celebratory and has a life of it’s own. An absolute gem in their discography.
1. Karma
I have a love/hate relationship with singles. They get overplayed and forced down your throat, so a song you once loved can become one that you loathe. As such, it’s probably a small mercy that ‘Karma’ never got put out into the commercial mainstream. It sat at the back of the ‘Headlines!’ record waiting to be unearthed and then – bam! All the personality you want from a girlband of today, sass and attitude aplenty, Vanessa’s spoken word intro on the live cut, shimmering beats that from the off sound as vibrant and fresh as the tune itself and, finally and most importantly, ridiculous lyrics (‘I hope you choke on some really hot coffee’ takes the biscuit though, congrats Una). The most amazing thing of all is that there may be casual fans out there that are unaware of it’s existence. Run, my children, run – and listen to The Saturdays’ finest selection to date.
Words: Simon McMurdo

One Reply to “Finest Selection: The Top 54 Songs By The Saturdays”