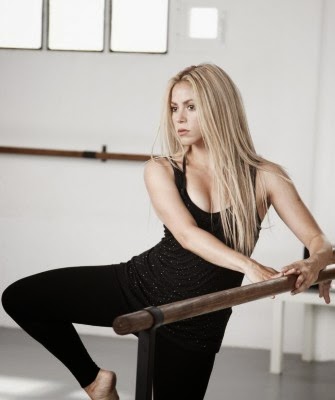 Warning – the acoustic guitar on the ‘Shakira.’ album cover is not a red herring. Calm your hips and put your bellies away – the mature stage has finally hit and on her self titled offering, Ms. (…er, what is her surname actually?) has done a Taylor Swift and decided that nothing is classier than tousled hair and a wooden instrument. In fact, it seems the two have switched roles. As TayTay struts about the stage blonde hair-a-flicking, Shakira has devoted half of her new record to acoustic led numbers concerned with the more deeper things in life. Like love and all that business.

You might let her off the ballad heavy release if she had made some effort to disguise it. But no – she insists that both the deluxe and standard artwork feature one part Shakira, two part guitar. Does she have no shame? Even worse, she clumps all the slow tunes together meaning that you’d better get all your best moves out before ‘Spotlight’ concludes because there’s one big comedown from then on. Why would you do this to us Shakira? Just when we were getting ready for a dose of high energy latino pop (J:Lo doesn’t count anymore, FYI). Seriously though – the album’s structure is a bit jarring. The songs work well together in general but mixing it up between tempos would have made a listen through of ‘Shakira’ a little less of an effort. Quality wise, ‘Broken Record’ is decent if generic, ‘Loca Por Ti’ possesses a fair bit of power with it’s full band backing and ‘Medicine’ sits firmly in duet partner Blake Shelton’s world with it’s country twang. ’23’ has a warm chorus and vibrant post hook that sets it apart from it’s ballady cohorts.

One little thing I might have missed out, if only to dramatise my point, is that there is a stellar highlight hiding between the ‘Quiet Evening In With Shakira’ vibe of the albums latter half. It’s something of a Shakira staple to include one of her best compositions towards the end of a record – look at ‘Timor’ from ‘Oral Fixation’, or ‘Mon Amour’ and ‘Men In This Town’ from ‘She Wolf’. Thankfully, she hasn’t bucked the trend for ‘Shakira.’ with the warming ‘The One Thing’ boasting a fitting sentiment open to interpretation and an in-your-face chorus made all the more dramatic following on from it’s predecessors.

Anyway, I do enjoy saving the best for last. There is plenty to shout about in the first half – the two singles ‘Empire’ and ‘Can’t Remember To Forget You’ already standing out as expertly crafted, finely executed pop gems. ‘Spotlight’ returns to rocky Shakira and it’s a sound that doesn’t get old – the electro swirls around the guitar riffs sound vicious and vibrant. ‘You Don’t Care About Me’ has a Gotye vibe (yes, that one song we all know by him obviously) with it’s tender plucks decorating the sparse instrumental and quietly affecting hook. And on top of the whole record is opening track ‘Dare (La La La)’ which is the latino inspired anthem ‘Shakira.’ needed to root it firmly in Ms. Still-Don’t-Know-Her-Surname’s impressive discography.

With ‘Dare (La La La)’, Shakira has a safe route to fall back on. Given a speck of promotion, it would be an infectious global hit. It’s relevant (check out the production and dance breaks)  yet no different from the Shakira of old. Just the kind of progression the casual listeners like. The rest of the record is a little underwhelming, particularly on first listen. It does grow on you – the uptempo tunes sound decent enough to begin with but just get better and if you’re in the mood for a slow ‘un, ’23’ should placate you. Consistent and cohesive as it is, ‘Shakira.’ doesn’t leave you feeling too short changed by the end of the final song, it has plenty to go back to but as for the sough after accolade of truly flawless? Not this time, Ms Mebarak.